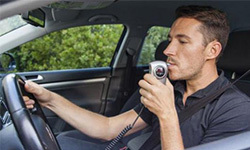 The picture shows a common "ignition interlock system" with an alcohol detection function in the United States. This lock is connected to the ignition system of the car. Before ignition, the driver must perform a blow test. After detecting that the alcohol concentration in the body does not exceed the standard, the car can be started.

For drivers with a history of Drunk Driving, some cars have interlocks installed on them. If the device detects that the driver is drunk, the car will not start.

This "ignition interlock system" (Alcolock) is installed in the socket of the car's ignition and requires the driver to exhale into the alcohol detector before starting the car. If the blood alcohol level exceeds 80 mg per 100 ml standard, then the driver cannot start the car engine.

It is reported that the device has been used in countries such as the United States, Canada, Australia and Sweden, and the EU is also studying the possibility of taking this measure in full.

The alcohol sensors currently developed by Winsen Technology are currently commonly used in fuel cell type (electrochemical type) and semiconductor type. These two types can be manufactured into ignition interlock system or portable breath alcohol testers, which are suitable for on-site use. Compared with the semiconductor type, the electrochemical type alcohol tester has the obvious advantages of good stability, high precision and good anti-interference.

The ZE30-C2H5OH electrochemical alcohol module is a general-purpose, miniaturized module. The electrochemical principle is used to detect the presence of C2H5OH in the air, which has good selectivity and stability. Built-in temperature sensor for temperature compensation; digital output and analog voltage output for easy use. ZE30-C2H5OH is a universal gas module designed and manufactured by combining proven electrochemical detection technology with sophisticated circuit design.

The ZE31-C2H5OH electrochemical alcohol module is a general-purpose, miniaturized module. The electrochemical principle is used to detect the presence of C2H5OH in the air, which has good selectivity and stability. Built-in temperature sensor for temperature compensation; digital output and analog voltage output for easy use. ZE31-C2H5OH is a universal gas module designed and manufactured by combining proven electrochemical detection technology with sophisticated circuit design.

Is the Dust Sensor Wired when Shipped?

How to Install and Place the Infrared Dust Sensor?

It must be installed vertically. Keep away from artificial air flow such as fans. When used in air purifiers, the front and rear of the fan cannot be installed. Optionally install it on one side of the shell, but keep vents on the shell to ensure that the external air can diffuse in.
Read More >>

Can the Two Voltages of Mq-7 Exist All the Time, or Do They Need to Be Powered Alternately? if It is an Alternate Power Supply, What is the Appropriate Power Supply Time?

It requires alternate power supply. Please check the information on the product manual. This sensor is powered by 1.5V and 5V alternately. The low temperature and low voltage (1.5V) state can detect CO, and the high voltage (5V) is the desorption process. The recommended 5V voltage duration is 60s, 1.5V voltage duration is 90s to alternately supply power. Since it is a desorption process at 5V, it is normal for the voltage to drop when CO is 150ppm.
Read More >>