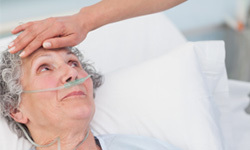 These devices basically rely on oxygen masks or nasal oxygen tubes to inhale oxygen, which belong to open oxygen inhalation, that is, when a person inhales a breath, in addition to the supplied oxygen, some air (21% oxygen concentration) is also inhaled, and the oxygen concentration that actually reaches the lungs is the oxygen concentration after mixing the air. In oxygen therapy and oxygen rehabilitation, too little oxygen inhalation will not achieve convalescent effect, and excessive oxygen inhalation will cause harm, so it is very important to control the oxygen flow.Gas flow sensors used in oxygen generator must be able to accurately measure ultra-low flow so that they can be used to detect when the patient is exhaling, when the air flow should be reduced, allowing the patient to exhale easily and comfortably.

The F1031V-2 flow sensor uses a new generation of MEMS sensor chip technology to detect the flow of the gas medium in the flow channel using the principle of thermodynamics, with good accuracy and repeatability.There is a built-in temperature sensor, each of which has a proprietary temperature compensation calibration function, and has a linear analog voltage output, which is convenient to use.

When the flow sensor is applied to the oxygen generator, it is mainly used to measure the flow of oxygen entering the system to ensure sufficient air supply. The gas flow sensor used in the oxygen generator must be able to measure ultra-low flow. By judging the breathing rhythm of the patient during sleep, according to the breathing speed, control the intake pump, and adjust the size and speed of the ventilation volume to keep the patient's breathing and intake frequency consistent, to provide sufficient oxygen concentration in the lungs.

Can the Two Voltages of Mq-7 Exist All the Time, or Do They Need to Be Powered Alternately? if It is an Alternate Power Supply, What is the Appropriate Power Supply Time?

It requires alternate power supply. Please check the information on the product manual. This sensor is powered by 1.5V and 5V alternately. The low temperature and low voltage (1.5V) state can detect CO, and the high voltage (5V) is the desorption process. The recommended 5V voltage duration is 60s, 1.5V voltage duration is 90s to alternately supply power. Since it is a desorption process at 5V, it is normal for the voltage to drop when CO is 150ppm.
Read More >>

What Are the Precautions for Manual Soldering of Semiconductor Sensors?